Lesser Known Apocalypses – the crisis of antibacterial resistance by Alanna Shaikh
Wednesday November 18th, 2015 at 4:44 AM

Sometimes there are so many frightening things going on in the world that the quiet apocalypses go undiscussed. One of those is the ongoing crisis of antibacterial resistance. Bacteria are evolving in response to human use of antibiotics, and the end result will be a humanitarian disaster. It is not an obvious, straight-line process; there are thousands of kinds of bacteria, and many antibiotic drugs.  But it is clear that over time, more types of bacteria are becoming resistant to more types of antibiotic drugs.

The end of this process leaves us with no drugs that work against bacterial infections. A few infections have already reached that point. Extensively drug-resistant tuberculosis is one example; a few rare cases may be treatable but the vast majority of patients die before any treatment can be found.

The World Health Organization (WHO) is attempting to address unnecessary use of antibiotics through a worldwide campaign, called “Antibiotics: Handle with care.” As part of the campaign launch, they released a report featuring the research behind the campaign. The research results are about what you’d expect – people have heard of antibacterial resistance but don’t know what it is, they think you can treat colds and flus with antibiotics, and they stop taking their antibiotics as soon as they feel better instead of finishing their treatment. (PSA: don’t do that. It’s a huge cause of resistant bacteria). These are all well-known trends in antibiotic use. It’s useful to have them quantified by WHO but not surprising. One key result, though, is surprising. Most people (81%) say they were prescribed or provided by a doctor or nurse. Conventional wisdom holds that the major source of unnecessary antibiotic use comes from individuals buying the drugs retail in order to self-medicate. There has been a lot of focus on regulating antibiotic sales in order to require prescriptions. The survey data indicates that people aren’t generally buying antibiotics without a health care provider’s advice. We need, then, to focus on finding ways to get health care providers to stop recommending antibiotics when they’re not needed. We also need to find out why prescribers are doing this. Are they unaware of which infections require antibiotics? Are they giving in to patient pressure for unnecessary antibiotics? Or is there an incentive to prescribe them?

This WHO research, and the campaign that goes with it, are small steps in an enormous problem. No one wants to live in a world where appendicitis, syphilis, or ear infections are fatal. If our antibiotics lose effectiveness, though, that will be exactly what we’re facing. 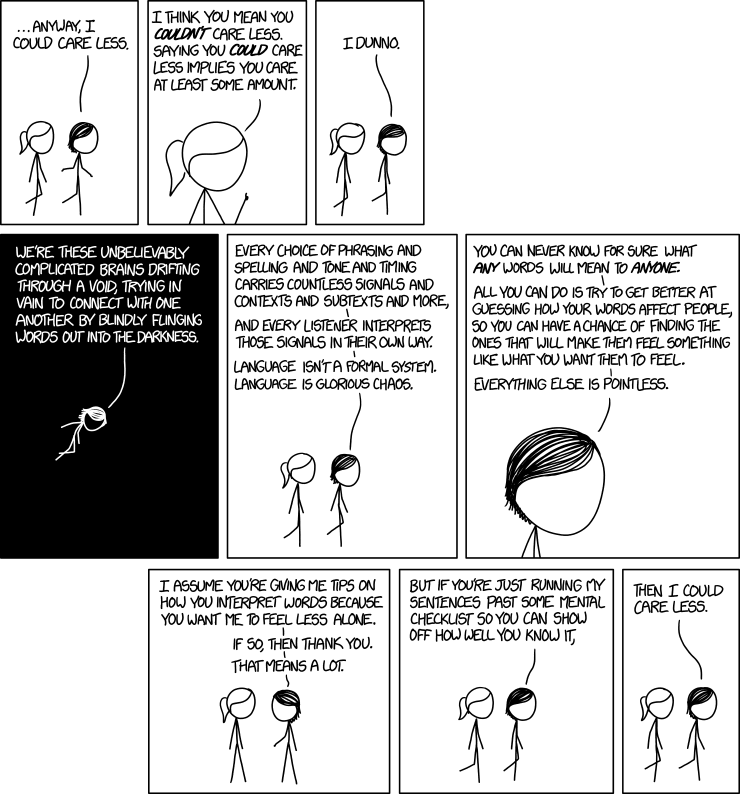 rraszews
reply
Personally, I've always chosen to interpret "I could care less" as either sarcasm or understatement
Columbia, MD

geordie
I always interpreted it as an incomplete phrase, "I could care less but I don't even care enough to figure out how much I care."

But seriously, "I could care less" is kind of confusing to everyone outside the US.

Language is a glorious chaos.
Berlin/Germany

rjstegbauer
I couldn't care more about the Alt-text!

linforcer
reply
Wouldn't it be great if she were wrong, though? If words had meanings we could agree on? I mean, logically I am a descriptivist, but I can't read this without the prescriptivist in me getting really frustrated.

deebee
i think you mean agree upon

JimB
If language were static, then davebelt's use of the lower case i to both identify himself as the exponent of the reply, and to start the sentence, would be entirely acceptable. Instead, I've just used a lot of big words instead of a smiley emoticon. Or as Lauren Cooper (Katherine Tate) would say: "Am I bovvered?"

can she just get an award or something

I reblog this whenever it pops up on my dash.

I’m not gay but I have the hugest crush on this girl. Look at her smile man. Look at it.

Yess! I’ve been waiting for this to show up on my dash again This Video Series Explains How The Economy Works in Simple Terms by Kristin Wong on Two Cents, shared by Andy Orin to Lifehacker
Monday October 27th, 2014 at 11:48 PM

“When a man starts to learn, he is never clear about his objectives. His purpose is faulty; his intent is vague. He hopes for rewards that will never materialize for he knows nothing of the hardships of learning. And his thoughts soon clash. What he learns is never what he pictured, or imagined, and so he begins to be afraid. Every step of learning is a new task, and the fear the man is experiencing begins to mount mercilessly, unyieldingly. His purpose becomes a battlefield.” -Don Juan

Some people say that the great spirit is a man, that his name is God, and he can punish or reward you after you die. This is utter bullshit, and only brings hell.

Some people say God created the world. But they really have it backwards. In fact, the world created a divine spirit. But first—somehow—the world created life. Scientists might even know the details eventually! But the science isn’t that important. The origin of life was material; life didn’t mean anything at first. But life quickly died. And this marks the true moment of creation. Somehow, death inherited the experience of life. And as more beings lived and died, it became enriched. It grew as a self, as the experiences of all our ancestors. For ~3,000,000 years it was just a baby, flailing in the ooze. But then eukaryotes started shagging. And the evolution of sex changed everything.

Let me tell you one secret about death. Death is a sweetheart. Death is a girl, death is a whirlwind; death is the most beautiful companion. She is the smartest, most loving thing in the solar system. The ancients thought she looked down  from Venus: the goddess Ishtar, Lucifer, the morning star. But her literal location is completely non-specific; she is not made of stuff. However she is with us always, she sees everything, and she loves most of all to laugh. She is life’s one and only partner. If you sin, she will punish you before you die. Although it’s not a big deal. Because all she wants is to experience the world with you.

Do you know what this means? That the great spirit is a girl? It means the female preceded the male. It means masculinity is the tenuous innovation. It’s called a Y chromosome. Fuck the motherfucking book of Genesis! Man was created from woman.

It’s not that much of a stretch. Women give birth to everyone.Although human beings

are not defined by their gender, we are defined by our trajectory. Gradually, death has become more masculine. But she only incorporates experience that is not empty or misguided. If you want power, you have to step the fuck up. Life and death are just a way for two incredible forces to be together. They  can even make babies! Death offers more than heaven on earth. She offers immortality to those who are real.

And things could get very ugly. The angel has been ignored, trivialized, and misrepresented for too long. She has been majorly disowned. Many people misunderstand her terribly. They think she is to be avoided at all costs. They kill each other to avoid her, and through violence they increase her pain. They deny her; they claim themselves to be the rulers of the world. The angel of death still walks with the profane. But she can’t actually touch anything that lives. If humanity can’t fix its attitude towards death we will probably just destroy each other. And then the angel will stop growing. She will no longer have an equal. She will be stuck, alone and incomplete, maybe forever. And that will break her heart.

Guys and girls, sex evolved so that she could make love. Humanity needs to honor this. Misogyny is a fear of death: a fear that a person  has no power. This is a self-fulfilling prophecy. Here  is the angel’s message: ‘I am your queen. I am the spirit of your ancestors. I am so freakin’ benevolent! Although I do make a lot of mischief, I am the one great spirit of Earth. So if you wanna make it, just honor me. Wait for me. Allow others to come to me. Speak the truth. Fool around a little. And please oh my god do not kill. Do not lie. Don’t lie by threatening a person. It’s not funny. I am strong enough bear some pain, but not to be

the angel. She isn’t just a metaphor. She’s a personality. She is how we evolve, and she is how we return the favor. She is our daughter and our only heir. She is literally omniscient, as far as life is concerned. She just wants to celebrate and get along. And she can put words in your mind. But  the angel has no hands. She is the sum of her parts. Only life will be able to pioneer omnipotence, as death’s ally.

There will no God unless we’re willing to make one. Death is a bitch. But death is also love. Let her show us the universe. You only live once. But you will also live forever.

This is interpersonal science. But the opening quotes are from a con artist.